Posted on 9 December, 2016 by Zealot Script Leave a comment 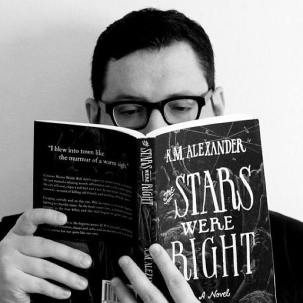 K. M. Alexander is a Pacific Northwest native and novelist living and working in Seattle with his wife and two dogs. He is an avid hiker, cold-weather enthusiast, world traveller, wannabe cyclist, and a self-proclaimed beer snob. His work explores non-traditional settings within speculative fiction, bending and blending genres to create rich worlds and unique, approachable characters.

I love getting lost in worlds of my stories, and the sense of adventure inherit in that, and I love sharing those places with others and watching people interact with them.

Funny enough, I started out wanting to make narrative-rich video games. I did it as a kid and even worked on several projects as an adult. Soon, I quickly realized that my desire to make games was actually born out of a desire to tell a story. I have always been a reader, but no one was telling the stories I wanted to read. So I stepped back, refocused, and began to write. Everything clicked after that.

There’s a lot! China Miéville is a huge influence on me, especially from a world-building standpoint. Neil Gaiman as well. Stephen King has also made a significant impact on my life, in particular, his Dark Tower series. Ursula K. Leguin is another author who I adore. Mark Twain as well.

This question gets asked a lot, and everyone has similar answers: write every day, finish what you start, etc. But, in reality, advice will only get you so far, and everyone’s path to success will be different. Be willing to try a lot of different things, and fight through the days of discouragement.

I read all over the place; genre doesn’t really matter to me. I do enjoy westerns quite a bit, and I find that there is always hints of westerns that creeps into my work as a result. I, of course, read a lot of science-fiction and fantasy, but I tend to work in a weird middle ground between those. I find myself enjoying the strange gray spaces between genres.

Oh, man I’ve actually never thought about this before. From the Bell Forging Cycle, I’d have to go with Hannah Clay or Hagen Dubois. I feel like there are a lot of layers to each of them, and I hope we can explore their personalities a bit more in future books. Wal just needs to stay out of trouble.

I’m going to cheat and give you three!

Blood Meridian or the Evening Redness in the West by Cormac McCarthy — This book is brutal and raw and often more horror than it is a Western. But McCarthy writes beautifully, and no one can set a scene like him, the book is amazingly engaging and beautiful.

The Scar by China Miéville — This is my favorite from his Bas-Lag series. It was one of the first books that opened my eyes to how stunning and vibrant a genre-blending weird fiction novel could be. The story is also amazingly complex and satisfying.

Art & Fear: Observations On the Perils (and Rewards) of Artmaking by David Bayles and Ted Orland — Everyone who creates anything needs to read this book. It’s encouraging and inspirational and a quick read.

Honestly, I don’t find making edits that hard. Usually, with projects, I’m throwing away a lot of material that just doesn’t work within the narrative I’m trying to create. Take my current project, Coal Belly; I wrote the first chapter three times from the perspective of three different characters before I found one that worked. I loved all three of those chapters, but only one will be in the story.

Learning to kill your darlings is vital.

Hmmm, I have two.

Neil Stephenson’s The Diamond Age: Or, A Young Lady’s Illustrated Primer would be a fascinating place explore, New Chusan in particular. There is so much there I think it’d be a wild experience. I’m a huge fan of cities (especially megalopolises) it forces life to adapt, cultures must capitulate and evolve if they intend on surviving. It ends up creating some incredible conflict.

In the other direction, but for similar reasons, I’d also love to explore China Miéville’s Perdido Street Station. If The levels of life crammed together in the port city of New Crobuzon would make for a fantastic (and often terrifying) place.

Mark Twain, the man had a way with words that’s untouchable. Even today, a hundred years later, his work is poignant and hilarious.

This is harder than I realized, so many movies are based on books or comics these days. I’m going to pick Alex Proyas’ Dark City. I love that film, and it was an actual original screenplay! There is so much happening visually in that movie, and the layers of mystery would make a great tension for a novel. Hell, I’d write that novel if someone would let me.

I’m taking a break from the Bell Forging Cycle and focusing on a new series. The first book is called Coal Belly—it’s loosely based on a manuscript I wrote years ago. I’m calling it a “riverpunk” novel. (Yeah, I’m totally making up that term.) Think winding rivers, riverboats, delta blues, cowboys, gunfighters, warring nations, civil war, intrigue, spycraft, science, and of course weird magic. Its roots has hints of steampunk but removes stuffy Neo-Victorian aspect and instead leans heavily on an old west/civil war aesthetic. It’s fun stuff. I think readers are going to love it.

Find out more about KM Alexander’s Bell Forging Cycle, his upcoming work and him in general on the following websites