Posted on 21 January, 2017 by Zealot Guest Author Leave a comment 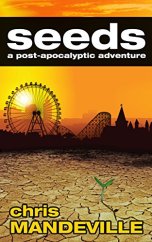 Chris Mandeville’s post-apocalyptic novel, Seeds, is one of the best stories to read. It has everything a post-apocalyptic story should have. There is the story about how the world fell apart, what it left behind in its wake, and how different areas of people reacted after almost fifty years of having to survive within their means. This brings us to our heroes, our villains, and Mandeville’s ability to write about the human mind.           Seeds starts us off with a medic named Reid, and shows his secret love for his dead brother’s wife, the horrible living conditions that he faces every day, and the slightly cruel way the military rule is taking over and getting rid of some religious aspects of their 48 year society. In Reid’s world, strangers are bad news that should be killed on sight, God doesn’t want man to learn how to regrow food and showed his anger by burning the world, and everyone is dying from malnutrition.

After being forced to marry his recently deceased brother’s wife, the two go on their honeymoon and find a woman with grown food. When the woman dies, leaving behind the name of the place she is from, Reid decides he needs to go find this place and bring back some seeds so that his people won’t die. Accompanied by his grandfather, who was able to find a military base with a fleet of hummers that hadn’t been destroyed by the solar event, the two make their way to what used to be known as Los Angeles.

In the seas, a Russian captain named Nicolai manages to get time off for his crew so that they can relax for more than a few days. However, once his feet touches ground, his world is pulled from under him as he finds out that his son and daughter have sailed into pirate territory in search of seeds. Mounting a search and rescue team, he heads to Lost Angeles, the same place that Reid is going. The same place that Chancellor Pascal considers himself a king.

With short chapters that intersect all three of these characters paths, weaving them together to lead the reader from beginning to end, there is so much action in this book that it can be read in one day. The characters are all well developed and intriguing, some more than others when considering how naïve Reid is to the world in contrast with his grandfather, but the story as a whole is pretty amazing. I loved the insanity from Pascal, the societies that Mandeville created, and the small little nudge of religion. Normally, I don’t like religion in fiction books because it tends to overshadow the story, but Mandeville made it so that religion was not a focus of the story (even though it has a huge impact on what happens), and she was able to show that not everyone is perfect in such religious societies.

This is definitely one of the best post-apocalyptic stories out there, especially since it shows how different areas of people were affected. Some relying on the military, others relying on religion, and some relying solely on themselves and those around them. And really, when reading, it should feel as though the readers are reading about someone and the events surrounding them. They shouldn’t be thinking about how the author is moving plot along.