Posted on 24 March, 2017 by Zealot Guest Author Leave a comment 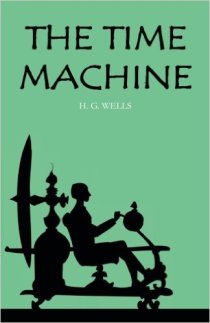 The book is written as a frame narrative. The story starts with our protagonist, referred to only as The Time Traveller telling a group of friends about his time-travel device and explains the concept to them. In order to prove it works he activates the device, and the guests are asked to come a week later when they see The Traveller  walking in all messy and exhausted. There the epic tale of his travels begins.

He travelled to the year 802 701 AD, and there encountered small, humanoid creatures called Eloi. He soon finds out that the creatures are friendly, so he goes roaming around only to discover his time machine missing when he returns. Looking about, he decides that the only place it can be is in the pedestal of the nearby statue. He decides to observe the statue, and during the night he spots another kind of creatures, which he finds out are called Morlocks. Observing them, he deduces that they are nocturnal, and that they live underground.

The Time Machine here becomes a story of friendship, as The Traveller encounters Weena, an Eloi that he saves from drowning. Deciding to explore Morlocks’ world, he finds out that matches are a good weapon to fight them off. Trying to acquire more matches, he stumbles into Morlocks who were out hunting, and as he retreats he starts a fire, in which many of them are killed. A battle ensues, and Weena is killed. Running away, he comes to the pedestal, finding it open. Just as Morlocks think they have him trapped, he starts The Machine, and disappears into the unknown.

He makes a couple more stops, one of which is 30 million years in the future, where he finds the air to be thin, and the only life sign to be a black blob with tentacles. A planet eclipses the Sun as he stands and observes.  The day after telling his friends the story, he leaves again, never to return.

In order to observe The Time Machine as something more than a fun read, we must put ourselves in the shoes of a late 19th century Englishman. The Victorian age – the age of prosperity during which the Great Britain was the world’s greatest power, is ending. The First World War is cooking up, and everyone can sense that terrible times are ahead. The Brits, used to the comforts of the times passed, are silently watching their world devolve, with basically no resistance. The aristocrats are obsessed with the image they portray in the society, and not allowing others to see that they have fallen on hard times.

H.G. Wells expresses his dissatisfaction with the state of the English society through Eloi. They are beautiful, small, dormant, obedient creatures, who live in a world that requires no intelligence, strength nor virtue.

Despite his criticism, Wells was a patriot, and a fairly forward thinking man. For example, he didn’t have prejudice towards Jewish people, which was very uncommon for his time. His political views were socialist, which is apparent in his work. Thinking about the concepts he introduced , and having his views in mind, one just can’t help but ask themselves “Did this guy actually time travel?

I have read through this book numerous times, and every time I’ve discovered something new that kept drawing me in. It is a must read for every science fiction fan, and I believe that everyone who read it felt personally attached to it. The author’s style and ideas are mind-blowing, even by today’s standards. Considering the fact that Wells and some of his contemporaries are the people responsible for ditching the old writing norms, and paving the way for modernism, his work is of a great importance for the science of Literature.

H.G. Wells’ The Time Machine might not be the best book to have ever been written, but it definitely is a timeless classic.