Posted on 9 June, 2017 by Zealot Script Leave a comment 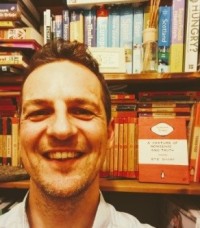 Ste Sharp was born in the hottest summer on record. The sun-god was happy and, by rights, Ste should have been sacrificed on the nearest beach, but he escaped. Twenty years later, with a degree in Ecology under one arm and a guitar under the other, Ste travelled the globe in search of tall tales and the perfect chord progression.

After sailing the seas with 16th century pirates, exploring the Brazilian jungle, living through the centuries as an immortal body-swapping alien and spending time with the ghosts of early Britons, Ste wrote Darwin’s Soldiers – his fifth novel.

With two young sons, Ste has roughly four minutes of spare time each day, during which he paints, writes and plays loud guitar in an indie band. Ste needs more hands.

Writing. It’s as simple as that. Reading has always been an escape for me, a doorway into another world and somewhere new to explore, and writing feels like an extension of that. I’m drawn to creating and exploring new landscapes and its population, and it’s something I can do anywhere – on a train, in the shower or at a desk. It’s medicinal too. When life’s drudgery weighs you down, an hour spent with an alien lifeform is enough to pick up anyone’s spirits.

I was camping in Australia many years ago and woke from a full-on movie-like dream and had to write it down. Then a backstory emerged and the characters became real people and a plot emerged. Two notepads later, I was addicted.

So many to choose from… but my top three would be David Brin for his world building, Isaac Asimov for his ideas and David Mitchell for his characters and genre-blending.

I love Science Fiction and Fantasy – anything with believable characters in bizarre worlds. But I’m currently writing a mystery serial killer novel set in Brighton in 1995, so no room for warrior aliens or swarms of robots.

There are loads of charismatic characters from all eras of Earth history in my book, Darwin’s Soldiers, but they’d be a bit dangerous to hang out with, so I’d probably be drawn to John Greene, the WW1 Machine Gunner and main protagonist. He’s a sound lad from London with a good sense of humour who I would feel comfortable chilling with, even if he does have a gun for an arm and a robot leg.

Cloud Atlas by David Mitchell. Beautifully drawn characters set in a variety of worlds, which perfects mixing historical and futurist fiction without losing the reader. I would read it again, but I leant my copy to a friend and never got it back!

In Darwin’s Soldiers I had several flashback scenes for the main characters, showing how they were taken from their last battle: Vikings sailing down river, assassins creeping into throne halls and Persians fighting Greeks. It was where the inspiration for the book had come from but I had to cut each one down. Every paragraph cut felt like receiving a punch.

Any Discworld or Culture book! As long as I could travel and explore freely without being molested by trolls or tracked by alien assassins.

Stephen Fry. Legend. He’d have the perfect word for every sentence and would turn the downbeat parts into amusing vignettes.

I know there are plenty of comics and graphic novels out there in the Guardians of the Galaxy universe, but I’d love to read a full on novel about the characters and how they got to be where they are now.

My next project will be to edit my Sci-fi novel Darwin’s Soldiers with my publisher Unbound Books. They use a crowdfunding model, so once I reach the 100% mark the structural editors get stuck in, then the copy-editors and finally the cover designers. I genuinely can’t wait to see the book cover and will have a poster of it on my wall.

There are no wrong ways, only detours.

Ste Sharp’s new novel, Darwin’s Soldiers, will be published next year by Unbound Books. You can buy an advance copy and help bring it to publication at:

Every pledger gets their name in the book!