Sputnik Award Most Prestigious in SFF, According to Creator.

Posted on 11 October, 2017 by Zealot Script Leave a comment

The Sputnik Award has announced the winner of the 2015/16 to, well, near-deafening silence.

Another reaction to the “infiltration” of the Hugo Awards nomination process, the Sputnik Awards were founded by Jo Lindsay Walton and announced in a guest editorial in Interzone back in July last year.

A wide ranging blog post addresses her unhappiness with the Hugos, mostly based around the infamous “Puppygate” scandal. However, her discontent covered the entire popular vote process. She railed about the entry fee to the ballot and one of her main complaints was that she herself had voted without reading everything on the ballot. This is a genuine problem with any popular vote award, that supporters will vote for the only work that they are familiar with, without regard for the quality of the other entrants.

The problem of voters not reading the entire shortlist was radically solved in the Sputnik awards but Jo herself selecting the shortlist and then putting it to a, erm, popular vote.

Now Jo addressed some of the flaws in her voting system directly in the FAQ on the Sputnik Awards website:

What happens if I pick the same book more than once?

Technically it is allowed, and will make that book more likely to win. But it is considered somewhat unsporting conduct.

Can I vote even if I haven’t read all twelve books on the shortlist?

Oh my God of course you can! Vote for the book you’ve read and loved, even if you haven’t read the others.

OK, but how is it different from other voting systems?

Everyone is eligible to vote, one ballot per person, till the ceiling of 400 is reached.

Credit to Jo, she’s clearly approaching this just a little bit tongue in cheek, but maybe it just turns out that it’s harder to run a new award ceremony than she thought. Multiple votes for the same entrant? A first come, first served limit of 400 voters? A needlessly confusing ballot system? Hedgehog? At least we know what second preference means.

One thing worthy of mention is the “Dungeons of Democracy” that was used to calculate the winner once the ballots were in. Entertaining, but labyrinthine in complexity, you can read up on the rules here.

Of course, it’s hard to take the Sputnik Awards seriously when as part of the Grand Announcement of the 2015/16 winner she claims that the Sputnik award “accomplished what it set out to do” by the fact that “it dislodged the Hugo Awards as the most prestigious award in SFF.”

Until we see Waterstones advertising a book as a Sputnik Award winner, we will have to disagree with you on that one Jo. 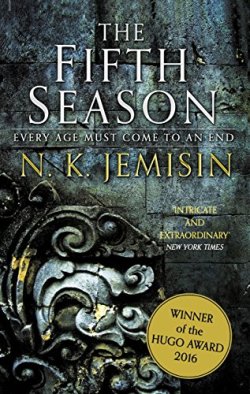 Interestingly, the book’s amazon page lists it as “A New York Times Notable Book of 2015, “Shortlisted for the Hugo, Nebula, Kitschies, Audie and Locus Awards” and “The inaugural Wired.com book club pick” but there is strangely no mention of the most prestigious award in SFF. Maybe they just haven’t got round to it yet. They’ll probably get right to it after taking that pesky Hugo award win off the image of the front cover.

Will we be seeing the return of the Sputnik in future, back to the FAQ for that.

“Maybe. But there are no definite plans.”